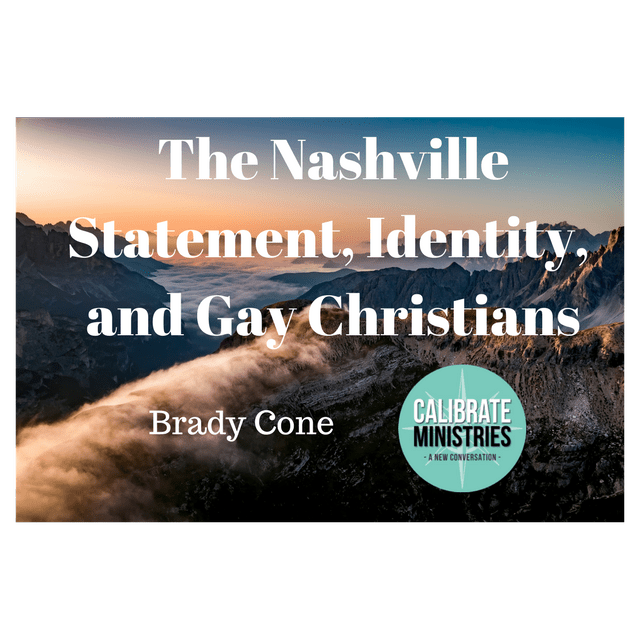 Today I signed the Nashville Statement, a faith statement released by the Council for Biblical Manhood and Womanhood, which clarifies the biblical standard for marriage and gender.  It seeks to contradict where our culture stands versus the biblical truth which has long been part of orthodoxy tradition for God’s creation. It brings clarity and sets boundaries.  The statement was initially signed by dozens of Christian pastors, leaders, and theologians including high profile people such as Albert Mohler, Russel Moore, John Piper, and Francis Chan. Since its release in August it has been signed by more than 17,000 pastors and Christian leaders. And it immediately stirred up piles of controversy. Some have hailed it as a much needed clarification on biblical sexuality, while others decry it as an attack on the LGBT community. While there has been backlash for several reasons, I would like to discuss just one of those.

As someone who’s life has been so impacted and entangled by same-sex attraction—and at one time identified as gay—these issues are very personal. Which is why I have devoted my life to helping give the church a better understanding of gender, sexuality, and how we as Christians can do a better job of making disciples in a culture where gender and sexuality issues affect so many.

I have many circles of friends who are LGBT, Christians who experience same-sex attraction, Christians who identity as gay, and everyone in between. In watching them discuss the Nashville Statement, it seems apparent that Article 7 is causing the most controversy. It states:

We affirm that self-conception as male or female should be defined by God’s holy purposes in creation and redemption as revealed in scripture.

We deny that adopting a homosexual or transgender self-conception is consistent with God’s holy purposes in creation and redemption.

An aspect which I have always taught complicates the issue of homosexuality is that it encompasses so much more than the behavior. It is about identity. And Article 7 of the Nashville Statement affirms that gay identity (self-conception) is contrary to Gods holy purposes.

In the 11 years since I surrendered my life to Christ and his Word, I have experienced drastic changes in how I live my life. In 1 Corinthians 6 when Paul speaks of homosexuality as a sin that will keep people from the Kingdom of God, he concludes the admonishment with “And that is what some of you were. But you were washed, you were sanctified, you were justified in the name of the Lord Jesus Christ and by the Spirit of our God.” (1 Cor. 6:11)

This verse has been central to my life for over a decade: being washed, sanctified, and justified by our precious Savior! When I first heard this verse just days after surrendering my life to Christ, it filled me with so much hope. “That’s what some of you were.” Past tense! That’s what they were, but they were not longer that! It gave me hope that I could live a different life, free from the sin that had enslaved me so deeply. But, as someone who knew nothing other than same-sex attraction and had succumb to the lie that being gay was my only option, how could I live in a different way? It started with a change in identity. I realized that I am not defined by my attractions, my feelings, or by the labels society gives me. But I am defined by Christ, and Christ alone.

It was Him who made me; who calls me His own. It is the Lord alone who determines my identity. Not my attractions, feelings, or desires of my heart (which Jer. 17:9 calls deceitful). God alone; my creator and savior. He gave me a new identity as His child who he fearfully and wonderfully made.

Though my same-sex desires didn’t go away—at times seeming stronger than ever—they no longer defined me. My identity is now so much more. My new identity in Christ took lead as the driving force behind the way I lived. Not my feelings or desires. And that new identity gave birth to a new life. A life free of the bondage I had lived in. The Lord didn’t flip a switch and convert me from gay to straight. Instead He started renewing my mind. Shining His light of truth to illuminate areas of my heart which were so deep, I hadn’t even known they existed. Using his light to expose lies I had believed, and by His grace, trading them for truth.

Change in identity was neither easy nor quick. For someone who experiences same-sex attraction, it feels like being gay is just who I am!  To the very core of my soul, it felt like an intrinsic part of my being. It’s who I was. Or so I thought. But, we serve a God who redeems, restores, and transforms. Untwists what our hearts have so deceitfully twisted. He doesn’t just change our behavior, He changes us from the inside out. He changes who we are. He gives us a new name which he writes in the Book of Life, and with that new name is a new identity.

Why is this of so much importance? Because our identity is the driving force behind our behavior. It is through a new identity we are able to live a different life. A new life that falls in line with God’s Word and who He made us to be. Not who the world, or our feelings, tells us we are.

There is a growing trend for Christians who experience same-sex attraction to embrace the gay identity, while holding onto the sexual ethic that marriage is only to be between a man and a woman, referring to themselves as celibate gay Christians. This movement believes acting on same-sex desires is a sin. However, they believe that their desires are so central to who they are, that it is okay (and sometimes beneficial) for their desires to be a part of their identity. Many of these same Christians also believe that their same-sex desires should not only be accepted as part of their identity, but celebrated as a gift from God.

This movement has been the cause of deep concern for me. I witness how men with same-sex attraction who still identify as gay, experience a more difficult walk in their journey with Christ. As I have stepped into the lives of hundreds of men with same-sex attraction, in my experience the individuals who continue to identify as gay are more likely to have internal struggle, turmoil, and a lack of peace that leads them back to living as gay. What starts out as feeling like a relief and weight off their shoulders (“I can finally be myself!) results in never ending despair, and a hole in their heart that can never be filled.  I believe the reason for this is simple: our lives are driven by our identity. We live out of an identity of who we are. And continuing to identify as gay, makes it a central part of their self-conception (identity). And embracing such identity, individuals can never fully overcome that part of their flesh. It continues to haunt them, entice them, and be a major driving force in their lives, and eventually behavior. It is the filter through which they see themselves, and respond to the world. It keeps one foot in the door of a life that Christ forbids, and holds them back from experiencing the complete renewing of their minds that the Lord desires for them.

I have great respect for all of my brothers and sisters in Christ who experience same-sex attraction; those who choose to deny themselves and not act on their desires.  I have fellowship with them, and I love them. I know first-hand how difficult the fight is, as they are bearing a burden that few in the Church understand. But for those who choose to identify as gay, I am burdened with a grave concern for their spiritual well-being, having witnessed too many whom I love slowly slide back into the life of slavery that is the homosexual lifestyle. That slow slide usually starts with a misplaced identity.

The people I know who have been very vocal about their disagreement with the Nashville Statement, particularly Article 7, seem to be the ones who still identify as gay. They feel like it’s denying that they exist and is attacking who they are.  And in a sense, they are correct. It is attacking who they are, because it is attacking their self-conceived identity that is contrary to what they have in Christ, and who He made them to be. A gay identity is in contrast God’s creation mandate and definition of gender found in Genesis 1:27,  “So God created man in his own image, in the image of God he created him, male and female, he created them”.

The Church, at times, has done a horrible job of speaking about LGBT issues in a way that will “bring grace to those who hear” (Eph. 4:29), and has caused undue pain to LGBT people. For those who experience same-sex attraction, the church has often failed to bear that burden with them–and that is a travesty. But I believe that these individuals who continue to identify as gay, will always continue to feel hurt and attacked by the truth. They will continue to have an inner turmoil and lack of peace no matter how the church handles and speaks about these sensitive subjects. This lack of peace is not caused by the tone at which the Church is speaking–as they claim–but they have misplaced their identity in a concept which is contrary to truth; therefore the truth will always pierce their hearts and stir a lack of peace. The only solution is to surrender to the Word of God–not only in behavior–but in identity. To live out of who He made them to be. Not out of their self-conceived identity, based on feelings that are a mark of the sin we inherited from Adam—instead of the new identity we’ve been given as children of Christ. Therefore, if anyone is in Christ, he is a new creation. The old has passed away; behold, the new has come.  (2 Cor. 5:17) The concepts and categories which we place our identity in are not just labels. They are the legs which our lives stand on.

I signed the Nashville Statement, because we live in a time when churches have given in to the ways of the world; therefore it is paramount for the Bride of Christ to be the defender of the truth God has entrusted to us. As leaders of the Christ’s Church, we have been commanded to “hold firm to the trustworthy word as taught, so that he may be able to give instruction in sound doctrine and also to rebuke those who contradict it” (Titus 1:9).

I signed the Nashville Statement because there is too much at stake. Eternity is on the line for too many people. The enemy is still lying and deceiving. God’s creation are still trading truths for lies, and worshiping created things instead of the Creator.

I signed the Nashville Statement because there are too many people whose gay lifestyle and identity is who they are. But Christ desires that it become who they ­were. And for that to happen, the Church desperately needs to draw a line in the sand, clarify truth, and proclaim boundaries, out of love and grace.